Keep informed on AIPEA initiatives by subscribing to the AIPEA list server!

Guidelines
1. Only oral and poster presentations with a student as the first author (and as the presenting author) will be considered.
2. All students presenting at the International Clay Conference and Euroclay are eligible.
3. A first and second prize will be given for each category (oral and poster), with a cash award for both first and second prizes. Amount will be establieshed by AIPEA President and Treasurer
4. All student oral and poster presentations will be evaluated by members of Council and their designates attending the Euroclay or International Clay Conferences. 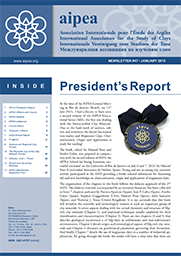 AIPEA OVER THE WORLD
The National Clay Societies
on the web

AIPEA
is affiliated to IUGS
International Union of
Geological Sciences